Sushi is food you usually get at a restaurant or maybe at the grocery store. It is not food that most of us prepare at home. Maybe it’s time to change that mindset.

Jeffrey Elliot and Robby Cook have collaborated on a new book that tells and shows you how to prepare sushi in your own kitchen!

I was able to interview Jeffrey and Robby about sushi preparation and their book. Here is our Q and A:

In a sentence or two, what is the main message of your book?

With practice and the right ingredients, anyone can start making sushi at home.

For the home cook who wants to prepare sushi, what are the key utensils needed (that he or she may not already have in the kitchen)?

A rice cooker is a great small appliance that guarantees perfectly cooked rice every time. A really sharp slicing knife; western or Japanese. You’ll need a sushi mat for rolling.

What’s the best way for a home cook to improve his or her knife skills?

Repetition and practice! It’s like that scene in the movie “Julie and Julia” where she goes home and cuts up a 50 pound bag of onions. The more you do it, the more confidence, speed, and skill you gain. Also read Jeffrey’s first book, The ZWILLING J.A. HENCKELS Complete Book of Knife Skills. 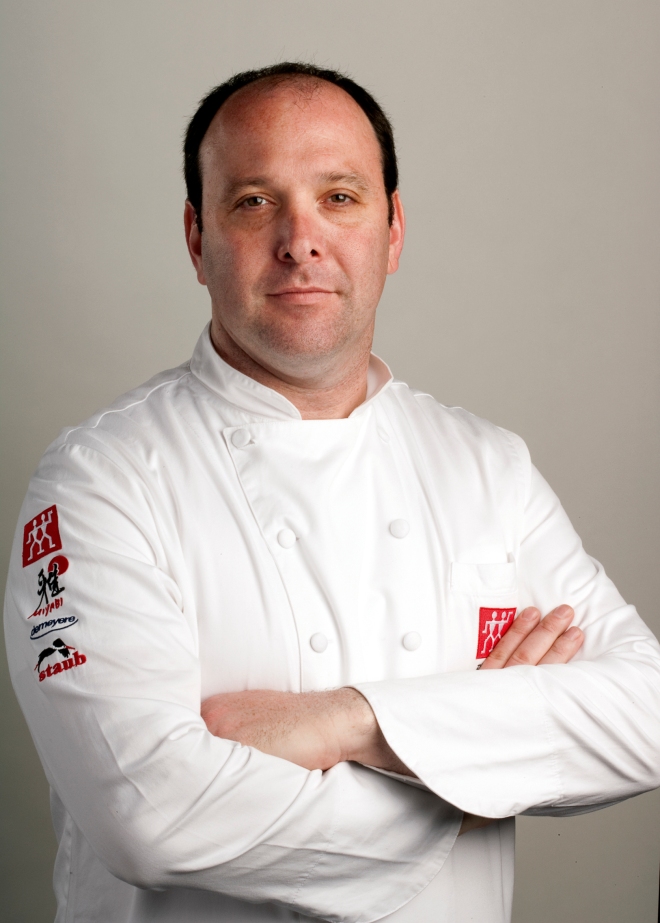 Can the home cook obtain all the food product he needs to make good sushi/sashimi at his local chain grocer or will he need to go to a specialty food store?

Most local stores carry a minimal selection of nori (seaweed) and a basic range of Japanese products like rice vinegar and soy sauce. For a broader range of choices you might have to go to a Japanese or Asian grocery, or even shop online. For fish the best fish for you is the fish that’s local to you.

Which fish do you gentlemen personally favor in your sushi/sashimi preparation and for your own palates?

Robby: I really like clams, sea urchin, Katsuo/Skipjack Tuna, salmon roe when in season in the Fall. As well as fatty snapper, such as Golden Bigeye snapper and Black throat Snapper.

With all foods, but especially sushi, appearance is important. How hard is it to get home-prepared sushi to look good? Can you offer a few hints?

Jeffrey: Build a strong foundation of the fundamental techniques taught in this book and then practice them. Again I’m going to fall back on practice, repetition based on proper technique is the only way to get better.

Robby: Like Jeffrey said, practice practice practice and you and your sushi will become more fluid and refined. Also referring to question below, watch how the chef plates and arranges the sushi. This will help you at home as well.

Where did you guys acquire your sushi prep knowledge? Is sushi included in the training at the Culinary Institute of America?

Jeffrey: When I went to the CIA, ONE day was devoted to Japanese cuisine, of which sushi is a small part. It has expanded greatly in the 20+ years since I went. I took a certificate course at a sushi school in California, and I was the kitchen chef at a Japanese restaurant in Miami, where in my free time I would learn from the sushi chefs.

Robby: I started making sushi for fun on my own during college at the University of Iowa. I later went to the California Sushi Academy. Following that I moved to NYC and went to Institute of Culinary Education, where I basically taught the short sushi class. Then I continued to work at various sushi bars until landing the job that I am at today. 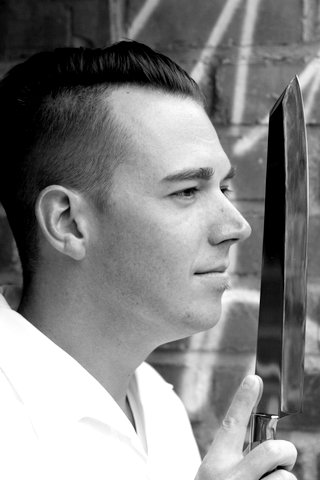 When I am dining at a sushi restaurant, what should I pay closest attention to (to inform my own sushi prep)?

Watch how the chef works, organizes, and arranges his station. Watch how he holds his knife while slicing different fish and makis. As well as how the chef differently handles the rice for nigiri and maki.

If a person gets your book and wants to prepare a holiday party appetizer, what items from your book would you recommend?

Hand rolls are great appetizer, and it’s easy to teach and learn. What we like to do is put out an assortment of fillings, different fish and seafood, vegetables, even meats, as well as garnishes like spicy mayo, scallions, sesame seeds. And then let people make their own after doing a demo of the technique. It’s a great way to get everyone involved and talking.

For those who may be traveling soon, can you recommend a favorite sushi restaurant (other than your own) somewhere in the U.S.?

Jeffrey: There are so many great sushi spots in cities like New York, Seattle, Los Angeles and San Francisco, it’s hard for me to pick just one.

Robby: I really like Ushiwakamaru and KyoYa (not necessarily sushi but great Japanese cuisine) in NYC. On my last trip to Japan these 2 were amazing: Sushi Yoshitake and SushiYA Ginza.

Jeffrey and Robert’s book is available now for a list price of 29.95. Click HERE for the Amazon link.

The hardcover book is published with a “user-friendly concealed Wire-O binding.”