In 2009, my family and I visited the Twin Cities and had fish and chips at Brit’s Pub on Nicollet Mall. That’s not far from where Mary Tyler Moore famously threw her hat into the air in the opening of her 70s TV show.

Sidewalk dining on the downtown Minneapolis mall is nice because the only vehicles allowed thru the mall are busses. And the Pedal Pub, a cool way for a group to go bar-hopping. The folks who rode past us that evening all appeared to be having a fun time. Here are a couple of photos I took. 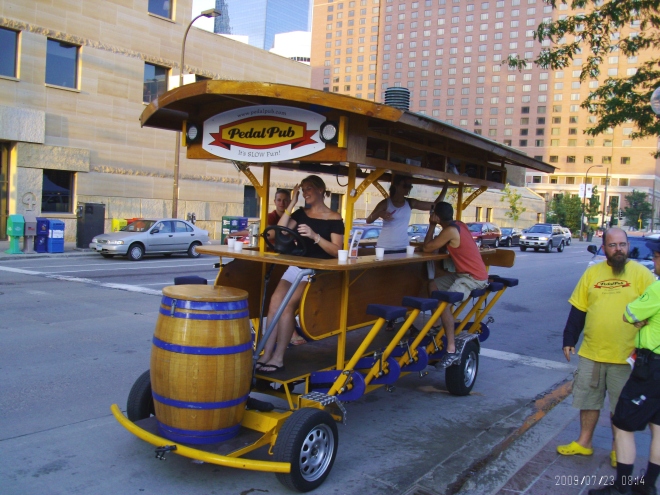 This past Saturday, there were attacks on Pedal Pubs in Minneapolis by folks with water balloons and water guns. And one group of Pedal Pubs riders was made up of off-duty cops who confronted the attackers. Here’s video:

Why would people want to mess with folks who are just out for a fun time on a Pedal Pub bike? An article posted yesterday by the Minneapolis Star-Tribune points out: When there’s a Facebook page called “I Hate the Pedal Pub,” with more than 4,000 “likes,” it can embolden people to act in ways they never might have before. Read the full article by clicking HERE.

A Pedal Pub partner was quoted in today’s Wall Street Journal saying: “This would’ve probably flown under the radar forever” if there hadn’t been police on the bikes. Read the WSJ article by clicking HERE.

Here in STL, we have the St. Louis Bar Cycle which runs pub crawl rides around the Soulard neighborhood. Click HERE for their website and HERE for their Facebook page.

One would think that there would be a market for more such vehicles around metro St. Louis in neighborhoods that have a concentration of eating/drinking establishments. The Loop? Maplewood? CWE? South Grand?

Sounds like big fun to me. Just keep an eye out for guys with Super Soakers and water balloons.