Like one of the whole grain bread loaves he bakes in Cooked, Michael Pollan’s new book is dense. He packs a large amount of information and opinion in this volume, almost all of it enlightening and entertaining.

With a combination of scholarly research, field reporting and personal experiences, Pollan brings us a book whose style ranges from breezy conversation to collegiate textbook.

In Cooked, Pollan suggests that cooking was one of the greatest, if not the greatest, boon to human civilization. Because cooked food was easier to digest, we didn’t need to spend as much time chewing as our ancestors did. Therefore, early man had more time to do other important things. Cooked food allowed more consumption of meat, resulting in bigger brains for our species. 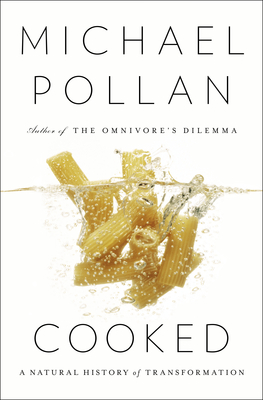 Pollan offers a long list of reasons why cooking is a good thing. He bemoans the fact that we are outsourcing more and more of our cooking to corporations. Those include food manufacturers, fast food chains, even your local grocer.

He breaks cooking down into four categories: fire, water, air (baking) and earth (fermentation). His travels take him across the US and the world to visit and, in some cases, work with knowledgeable figures in the world of barbecue, bread making, cheese making and home brewing. He also visits a Wonder Bread bakery to see how they do it.

He tries different kinds of cooking at his own home in Berkeley, California. He roasts a whole pork shoulder. He braises meats and other foods with one of his writing students, who just happens to cook at Berkeley’s acclaimed restaurant Chez Panisse. He bakes loaf after loaf of bread in his kitchen. He brews beer at home and at a friend’s home.

Pollan is not an impartial writer. He incorporates his opinions freely, but seems to be a generally fair observer of all that he sees, hears, tastes, smells and touches. He can be funny. He admits that kneading bread dough is a bit of a turn-on.

You may want to read this book with a highlighter in hand, so you can mark memorable passages and refer to them later. Cooked has factoids and metaphors galore.

You may, after reading, have a sudden desire for slow-cooked barbecue or fresh whole grain bread. You may also want to spend time in your own kitchen tonight, cooking from scratch instead of picking up a meal to reheat at home. Such a choice would make Michael Pollan happy.

One thought on “My review of Cooked by Michael Pollan”